Just as in the case of us humans, dogs have particular traits and habits that vary from breed to breed. Some breeds can be quite loving and affectionate while others can be fierce and ravening.

While most dog breeds (like all other animals) can hold some sort of danger for us, (defenseless humans!) There are breeds that are relatively much more fierce than others. According to NCBI, more than 20,000 people die of biting by dogs of dangerous breeds in India. This makes it even more important for us to educate ourselves on the habits of dangerous dogs. We have recently been getting a lot of queries on dangerous dog breeds. In this article, we have tried coming up with answers to most of your doubts on the fierce nature of some dog breeds in the world, ways to deal with dangerous dog breeds, as well as on how dangerous dog breeds are useful. Let us take a look at the top 4 dangerous dog breeds so you can be aware and cautious if you are planning to bring home one of them.

They are deemed to be one of the most aggressive dog breeds. Rottweiler’s are in the news, no and then, for attacking humans and hence popularly known as “Killer Dog”. The vicious behavior of Rottweiler has something to do with its history. They were primarily used in Roman Army where they accompanied the soldiers in the search operations and guarding their cantonments. They used to guard the cattle too.

Rottweiler is dominating in nature and is quite short tempered which is the primary reason they are involved in attacks. They like to be infused in doing some work. They get stirred and pernicious mainly when they don’t get much physical exercise to do. Fierce Rottweiler will not have to think twice before attacking someone. It is also found that Rottweiler can be very protective and loyal to their master if given proper training. However, these days properly trained Rottweiler’s have proven to be quite good with kids as well.

Another dog breed that makes it to the most dangerous dog breeds is Doberman. Doberman is popular for their faithfulness, intelligence, and ability to get trained extensively. They are also used in police and army services because of their robust, fearless, and loyal nature.

They have short hair hence do not need much grooming. But they do need a lot of exercises to keep them healthy and joyful. They are larger in size than most other dog breeds and its ears and tail make it look more intimidating. However, these days properly trained Doberman has proven to be quite loyal to its owners and family and also great for security purposes at home. 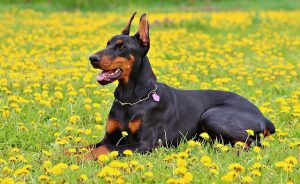 The fierce Pit-bull are dog assassins, which need to be trained to be friendly from early life. They are dangerous pets that attack with killing instincts and do not leave until the enemy is down. Their aggression is not confined only to other dogs; pit bulls sometimes kill other fellow pets and domesticated animals. They are the first choice for felonious dogfighting- they are in fact particularly bred for this. Pit-bulls are considered a dangerous dog breed in the UK and have been banned in the country.

Pit-bulls can be obedient and loyal to their master if trained properly. Experts can only do their training over a considerable amount of time and efforts spent on it. 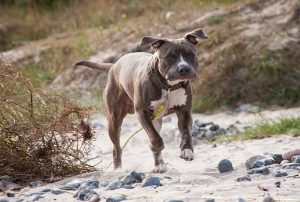 Earlier, German Shepherds were used for looking after sheep, but its sense and tremendous focus on the job in hand has made it the first choice for army and police all around the world. Their work for the German army during the second world war made them favourite for patrolling and searching jobs. They are protective towards loved ones and not so friendly with strangers if so trained.

The German Shepherd is renowned for instantaneous attacks. This behaviour pattern has been developed through years and this temperament passed on from one generation to another.

However, nowadays German shepherds have become household dogs. It’s in the way they are brought up. If accustomed to family love right from the birth and trained well they are the most friendly, loyal dogs. At the same time, they prove to be very nice security dogs and will give you peace of mind about safety. Precautions to be taken while being around dangerous dog breeds

Dogs are gregarious animals in general. However, they can be menacing if not handled carefully- especially the dangerous dog breeds we discussed. Dog temperament changes the habits of its master. What makes dogs aggressive are mainly two reasons, either it is of dominating nature or it is afraid. Human beings need to understand these characteristics and requirements to take proper precaution while accompanying and interacting with dogs of dangerous breeds.

These dogs are accustomed to the active lifestyle and not having anything to do makes them noxious. They must be made to do some physical work at frequent intervals- leaving them idle is inviting trouble and on the other hand, with regular energy burnout, they will be in their best moods.

Proper training must be given to these breeds since puppyhood to keep them calm and make them cope with human ways of expressing affection.

Internment in small spaces or keeping them in shackles leads to boredom and they might attack someone who comes close. Fettered dogs usually suffer cruelty by children and grown-ups who vex them from a safe distance. This makes them fierce and exasperated.

Children should be kept away from these breeds as children might unintentionally irk the dog, which can prove to be fatal. However, trained dogs are no threat to children as well.

As mentioned earlier, dogs are social animals- as far as they are treated well and right.If people interacting with them know how to interact with aggressive dog breeds, there is hardly anything to worry. Inexperienced dog-owners play a big role in seeding attacks, especially with aggressive breeds.

Some common human practices can take on an utterly different implication from a dog’s point of view- for instance, when a person looks right into a dog’s eyes or walks close to it, or pat its head from behind. Aggressive dog breeds do not like such acts and take it as an attack signal and react with an action not expected by (and not so pleasant for) the person.

Do not make a sudden movement. Keep calm and move away slowly to safety. No quick actions or turns.

Put both of your hands inside your pocket. This will make the dog sense that you are no challenge for him and might spare you with just barking.

Gradually take steps backwards but do not run. There is no chance you can outrun a dog so move slowly without much body movement. Running would only initiate a chase instinct.

Avoid staring right in the eye. Even turning your back on the dogs is not advisable. Experts recommend standing sideways while facing a fierce dog.

Do not mediate two fighting dogs. You might end up getting attacked by both of them. So let those guys deal away themselves until you know how to deal with them.

How To Defend From Dangerous Dog Breeds

Now we know some of the common human actions that can turn the fight mode on in a dog. But danger from dogs is not dealt away yet; we always need to be prepared for an attack, especially while you are around a dangerous dog breed. Well, these tips are useful in dealing with most dogs in general. Here are some tips to survive a dog attack.

Do not pull your hand or leg from the teeth of the biting dog as that will tear the flesh off and now you will be in more pain than before. Moreover, the aggressive dog breeds won’t let go that easily. They would just bite you somewhere else, leaving you with multiple injuries.

Evidently, Shouting for help is a better idea. You might find someone with a big stick that can scare the dog away. If nothing, yell out with all your might. Even the most aggressive dogs can be startled (with some luck), giving you some room to escape.

Look for anything like a stick that you can put in the dog’s mouth so you can remove your hand or leg from its teeth.

How The Dangerous Dog Breeds Are Useful

Dogs have been bred and domesticated for hundreds of years, and a number of traits are developed in them to help a man in one way or another. Earlier dogs were used to guard army camps, assist the hunters and also to keep the herds and flocks in check. Some dogs are still trained to do these jobs and some do other impressive works for us as well. There are service dogs to help the blind or handicapped person or to do search work and excavate things or bodies buried underground after natural calamities like an earthquake etc. Dangerous and aggressive dog breeds are also trained to help police and military in vigilance and find out toxic substances and bombs.

No human No human security can be as loyal as a dog. A security guard at home may run away when he sees a group attack on him. On the other hand, these dogs will protect and fight. They would not run away.A dog can sense and hear much better than us. They can warn us when danger or a stranger is near us by barking loudly. Such dogs are useful to watch out for burglary or trespassing and can prove to be fatal for the intruder.

Dogs used to guide and assist humans in their hunting excursions. A dog’s ability to smell and track is outstanding. Aggressive dogs like Rottweiler and German shepherd etc. are greatly helpful in sniffing, searching and tracking objects. Well, you might all have noticed a German shepherd in a bomb search squad.

Sheep herding dogs, such as German Shepherd, use their hunting sense of finding and organizing to control the flocks. They can be counted on for protecting the herd and for guiding them back.

Dogs are great security providers- reliable and loyal. It is advised to be mindful before buying any of the dangerous dog breeds- you should always consider a reliable breeder and trainer for this purpose.

If you are looking for a service or security dog for your home or organization, you can rely on Marshall kennel and Dog Security for the same. They provide security to organizations like RBI, HAL, Navy and lot more private organizations. They also provide patrolling dogs for industries, homes, communities. Check out www.marshallsecurity.in